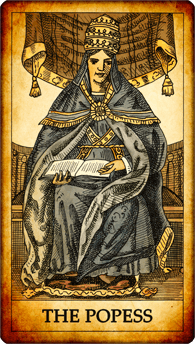 The figure of the popess is of medieval origins.

In fact, there were rumors about Pope John VIII actually being a woman.

These rumors, which were most likely unfounded, were rampant among the people and contributed to the appearance of this popular figure of a woman pope, which we also find in the Tarot.

The Popess card portrays a woman seated on a throne, dressed in a papal habit or sacred garb, and holding a book containing universal knowledge on her lap.

The face of the Popess is expressionless, and she is glancing straight ahead in spite of the fact that the book lies open on her lap, meaning that she need not look at the book as she already knows everything.

Under her head gear she is wearing a veil, and there is also a veil behind her.

The Popess is often portrayed between two columns, and in some cases she is holding keys in her hand – a symbol of the keys of knowledge –.

It often refers to a female figure who is reliable and sincere.

It is undoubtedly a positive card.

Appear conceited and presumptuous, use information for questionable ends, traps laid by a very intelligent woman.