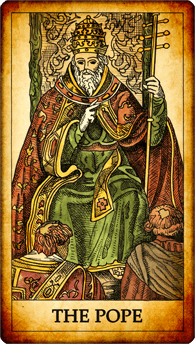 The figure of The Pope is one of the images of the Tarot that has remained most constant over time and in different decks of cards.

Indeed, The Pope is almost always represented in the same way: a pope seated on a throne, holding the staff in one hand and raising the other hand to bless the two figures kneeling before him.

The figure transmits wisdom and respect, but at the same time reverential awe.

In some Tarot decks, The Pope is portrayed between two columns, while in others it is the back of the throne that is supported at the sides by a sort of column.

The Pope symbolizes sound, selfless advice, the approval of others, well-deserved success, a faithful and loyal person upon which one can rely.

The Pope can represent an outsider, a mentor, a figure we respect and can follow as a role model.

Giving too much importance to the approval of others, not making decisions on your own, always following the crowd without having the strength to sustain our true positions.

In some cases, it may also mean excessive moralism.