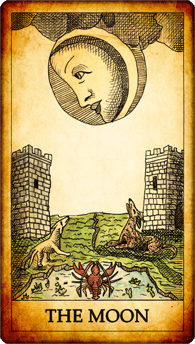 The Moon of the Tarot is overlooking two howling dogs.

The setting is spectral and obscure, just as the moon was considered the bearer of darkness and evil influence.

There is also an illustration of a crayfish, that with its peculiar backward gait becomes another sinister and obscure symbol.

On the sides of the card there are two towers.

The iconography of the card clearly evokes its meaning: there is a sinister and obscure atmosphere brimming with deception.

If caution is not taken, mistakes will be made; outside circumstances are unfavorable, tempting, and deceptive.

It is however possible to remain unscathed, but only by being astute and skillful.

The moon rays conceal the traps and perils of dangerous lands; it will not be simple to find your way and avoid making mistakes.

Someone is deceiving you or is speaking behind your back.

You are being deceived. Very dangerous circumstances in the near future.