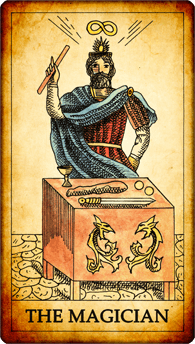 A magician or a conjurer, standing in front of his own workbench, is portrayed while lifting his magic wand.

Different objects are lying on the table, and all of them can be linked to the suits of the Tarot.

In fact, on the magician’s table we can see a cup, a knife or a sword, some coins, and a wand.

In cartomancy, the figure of the magician is often associated with the person who reads the cards.

In some illustrations, above the head of the magician there is a sideways 8, the symbol for infinity. Sometimes this symbol may be represented by the shape of the magician’s hat.

The magician is a figure that represents action; in fact, the magician is the person who makes his own destiny, who is enterprising, who acts, and who obtains results.

This is an undoubtedly positive card; in fact, it represents a person who is capable and intelligent, and makes good use of both attributes, and as a result reaches his objectives.

All the negative aspects of acting are exalted; for example, it may mean: acting negatively, too quickly, and acting without thinking, seeking status, lack of confidence in one’s own capabilities that are instead effective, misbehaving, obsession with material results while neglecting true values.