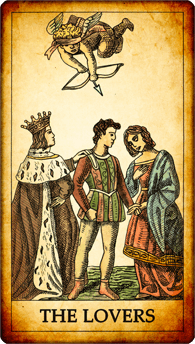 A couple in love is about to be joined in marriage.

Their union is sanctioned by a person on earth and by Cupid in the heavens.

Cupid is about to shoot his arrow, thereby allowing love to triumph.

In some Tarot decks, the hands of The Lovers are joined: yet another symbol, both Christian and pagan, of the union of matrimony.

The symbolism of the card is obvious: love.

Other meanings of the card of The Lovers may be: desire for true love, physical attraction that transforms into spiritual attraction, positive temptations.

Too much love can be oppressive, a union that is not positive, separation and break-up, negative temptation, even going as far as infidelity.