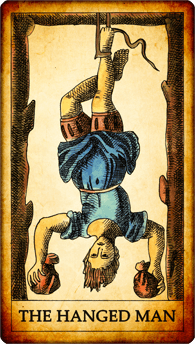 The position of The Hanged Man in the Tarot is that of an ancient form of torture: being hung upside-down by one foot with hands tied behind one’s back.

The Hanged Man, however, has a calm expression, almost as if he were meditating, tolerating the pain impassively.

At first glance, this card seems to transmit a negative situation of immobility, but at a closer look, we understand that it is instead the situation of a person who refuses to struggle uselessly and waits for events to change, totally aware that an unfavorable situation is only temporary.

The card symbolizes a sacrifice, an unfavorable position to be tolerated in order to reach an objective.

Major efforts are necessary, as are sacrifices, and having to overcome difficult trials.

It will be necessary to make the best of a bad situation, in that by reacting instinctively and incorrectly, this temporarily difficult situation risks becoming a permanent condition.

One must make sacrifices, be clear-headed under difficult conditions, and know how to be patient.

Temporary sacrifice, in order to later improve one’s own situation.

Useless efforts to change a situation that calls for only one course of action: waiting.