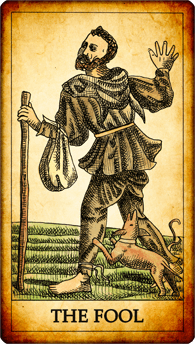 A vagabond, perhaps a jester, moves on with the help of a walking stick while a dog follows him, biting at his clothes.

The fact that The Fool card has no number associated with it or is at most considered the number zero card only emphasizes its peculiarity.

The card of The Fool may have a double meaning: both positive and negative.

The positive meaning is to encourage us to let ourselves go and live freely.

We should free ourselves from the excess of logic, rationality, and do what we like to do best.

We then live “as fools”, breaking the rules that others have imposed on us while doing what makes us feel better, even if it goes against common sense; the important thing is that for us it is positive and gratifying.

The negative interpretation of the card, instead, concerns reckless actions, carried out irrationally, “like a fool”.

A person who has acted irresponsibly, who needs to start over again. Otherwise: a lack of self-respect; letting oneself be passively led on by events.