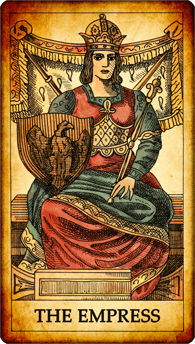 A young woman with regal garb and jewels, seated on the throne, gazing straight ahead.

The Empress of the Tarot is not as predictable a figure as she might seem at first glance.

In fact, she was a well-known and common figure during the Middle Ages, but not in terms of how she is portrayed in the Tarot.

Above all, the Empress was a figure who was rarely quoted or portrayed without the Emperor.

In the Tarot, instead, she is represented holding symbols of power: the scepter and the shield.

This portrayal, unique and rich in meaning, constitutes one of the many innovative contributions of the Tarot to iconography and medieval art.

These concepts are clearly symbolized by: the throne, the scepter, and the shield.

The Empress represents inner strength, willpower, and authority over things.

She can represent a strong outsider who helps us in a specific situation, a support upon which we can rely, a point of stability and strength in our favor.

Rigidity in morals and in action, an excess of drastic measures, excessive protective instinct towards another person, struggling to maintain current status.