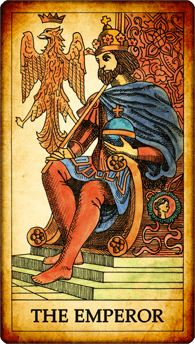 The Emperor is a bearded sovereign seated on a throne, transmitting determination and power.

All the symbols of power are present in this card: the sovereign’s clothing, the long scepter, the shield with the imperial eagle.

To further emphasize the concept of power, the emperor is often represented with his legs crossed, a sign that he has no superiors to whom he must be ready to rise and bow.

The Emperor wields the utmost earthly power, and at the same time is a wise, intelligent, and often just figure.