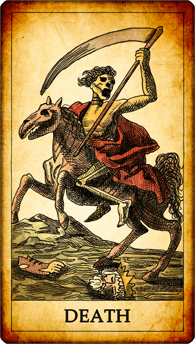 Here we find the familiar image of the skeleton wielding a scythe.

Death is number thirteen of the Major Arcana of the Tarot.

A disturbing figure on the whole, it is also ominous thanks to the details of the body parts of those struck down by the scythe of death.

However, Death is also paradoxically perceived as a just and fair figure, in that he strikes everyone indiscriminately, no matter what their social class or assets.

In fact, on the ground there is also the crowned head of a beheaded sovereign.

Death symbolizes a phase of the Cycle of Life, a traumatic phase that precedes a new birth.

A figure so frightening does not therefore necessarily mean that Death is a card that bears misfortune; in fact, its meaning is mainly that of change, of the conclusion of a cycle, and subsequent renewal.

Death means the end of the present situation, perhaps in a traumatic way, and the new situation that will follow.

Death can also concern the end of a negative cycle.

Obviously, this card – when associated with other unfavorable cards – contributes to outlining a not very positive picture.

Bad ending to a situation, misfortune.