THE MEANING OF WANDS
IN CARTOMANCY 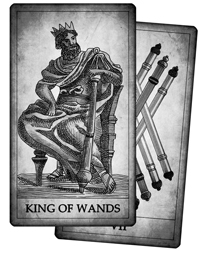 The Wands suit of Tarot cards represents action and initiative.

Wands are a suit that transmits force and action, whether for defense or offense.

There is also a reference to invention, to finding new ideas, to discovery.

These are energetic cards and, because wood is a natural element, they are also cards that recall life.

Wands are a suit that transmits the idea of action, but difficult or tiring action, and can therefore refer to tasks and tiring works.

In any case, it is a dynamic suit that indicates evolution, progress in a situation.

Power and strength are associated with these cards.

Even male virility is often associated with Wands that, as a phallic symbol, recall the interpretive meaning of everything that is masculine and paternal.

The Meaning of Reversed Wands

When Wands are reversed they can refer, in general, to too much action, or excessive force.

Suit cards must not be interpreted only by analyzing the symbolism associated with the suit.