THE MEANING OF SWORDS
IN CARTOMANCY 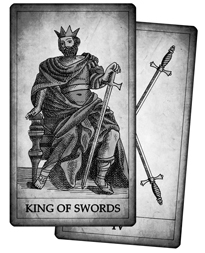 Swords represent authority and ambition – the sword is a common symbol of authority –.

The meaning may also concern ambition, the desire to excel, to win, drive, courage, the desire to compete with others, to confront others to flaunt one’s own value.

The latter are elements that, depending on the situation, should be read as positive or negative, in that the excess of these urges is undoubtedly negative, but the right balance is stimulating and positive.

The Meaning of Reversed Swords

Swords that are reversed can also symbolize a lost battle or a defeat.

Suit cards must not be interpreted only by analyzing the symbolism associated with the suit.