EGYPTIAN ORIGINS
OF THE TAROT 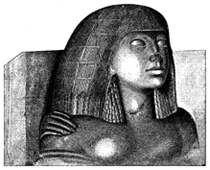 The most important contribution to the theory of Egyptian origins of the Tarot is certainly that of Antoine Court de Gébelin.

According to Court de Gébelin, in the beginning there was a primitive world, a “Golden Age” when there was a single culture, a single religion, and a single language.

However, this civilization eventually collapsed into ruin, giving rise to all the cultures, languages, and religions we know today.

Primigenial and original knowledge, the only true one, of this ancient civilization was therefore lost ... or nearly.

The Text of Court de Gébelin

The following excerpt from “Le Monde Primitif” – a true milestone in the history of the Tarot – presents the theory of Court de Gébelin on the Egyptian origins of the Tarot.

1.
Surprise that would cause the discovery of an Egyptian Book.

If we should hear announced that there exists, still today, a Work of the ancient Egyptians, one of their Books that escaped the flames that devoured their wondrous Libraries, and that contains their purest doctrine on interesting subjects, everyone would, without doubt, be eager to come to know so precious and so remarkable a Book. If it were added that this Book is widely disseminated over much of Europe, that it has, for a number of centuries, been in the hands of many, the surprise would certainly increase: would it not reach its peak if it were affirmed that it had never been suspected to be Egyptian, that it had been possessed as if it had not been possessed at all, that no one had ever tried to decipher a page of it, that the fruit of a refined wisdom had been regarded as a mass of extravagant figures signifying nothing in themselves? Would people not think that the informant was amusing himself by playing on the credulity of his Listeners?

However, this is absolutely true: this Egyptian Book, the sole survivor of their marvelous Libraries, exists even today: it is so common that no Scholar has deemed it worthy of study; no one before us has ever suspected its illustrious origins. This Books consists of LXXVII pages or tables, even LXXVIII, divided into V classes, each of which offers subjects as varied as they are amusing and instructive: in a word, this Book is the GAME of TAROT [...].